None of these
Can hold me

My Love Rescues me
From their dungeon


Together are
More than conquerors


Because of
His love for me

(In my Creative writing class, we are studying Poetry.  I have NEVER been much of a poet, it seems.  But, I took some advice from the text and decided to give it a try after reading my Bible, because I was so blessed.)

Some of you who are my friends on Facebook know that we are going through a trial with my daughter.  She has an injured shoulder from some past events, and she is in quite a good deal of pain.  She also has to have a second set of braces for one of her canine teeth is coming in wrong, and it is also very painful.  This physical pain is affecting her in many different ways.  As a mother is hurts me to see her suffering this way, even though I know there are others out there who have children that are in worse physical condition than my daughter.  But, she is mine.  There are also other trials that we are going through, which I do not have liberty to share, but...

I sat down to read my Bible this morning feeling defeated; mad at God for so many reasons.  I never really know where to read.  But, Roman 8:28 "popped in my mind".

So, I thought about that, how all things work together for good.  And that sounded like a promise.  The word promise I associate with the rainbow.  Then, I remembered a picture that a friend of mine, a former Sunday School Student actually, took with his cell phone while cutting grass.  He posted it on Facebook, and I downloaded it and altered it a bit, adding the verse to the picture.  It is beautiful. 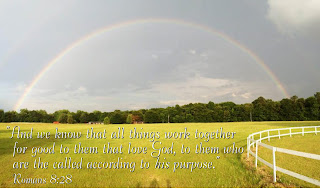 **Click to view larger
After creatively manipulating the photo, I checked Facebook for the morning.  A good friend of mine, Joy Nance, posted,

"I love my quiet time, in the mornings, with the Lord. Reading my Bible and praying. It's such a sweet time with my Father....... wouldn't trade it for anything <3"
And that spurred me to go back and read the text surrounding Romans 8:28, to get a better picture of why all things (including the bad things) work together for good...even though God said so...because at the time, that just didn't seem a good even reason for me (pity party-guest list of 1)
So, I read the entire chapter, but verses 35-39 brought me to tears, and painted this picture in my mind:


A damsel in distress (looking much like myself, but much thinner, with a clear complexion, and wearing a gorgeous white fitted princess dress, which was torn raggedly at the hem, and stained with dirt and mud) was valiantly fighting in a battle, only to be captured and hauled away to a dungeon.  From the dungeon's meager window, covered with three black grimy bars, barely big enough to fit the arm through, the damsel stretches out with all of her might to let her people know that she is there, that she has been captured.
Who are the captors?  The Grind of daily life, The Trials faced in that life, The Pain and Sorrow felt during those trials, The Confusion over choices to make, The Anger that things are not better, The Rage directed at God who has to allow these things to happen (remember Job...God had to allow Satan to afflict him), The Questions of why?  Why us? Why her?  We stepped out on faith, so why hasn't this worked..., The Toil of scraping and The Fatigue thereof, The Uncertainty of what will happen next, The Desperation of KNOWING that there is nothing that I nor duck tape can do to fix it, The Fear of what the outcome will be, The Anxiety of waiting for the outcome, The Loneliness felt when the rescue party is no where in sight, and The Shame felt because you couldn't handle the situation yourself.


Then, I read verse 37:
"Nay, in all these things we are MORE THAN CONQUERORS through him that loved us."
I surely didn't feel like a conqueror, and truthfully, I've not felt like one in a long, long time.
Then, I thought about the very phrase, through him that loved us...
And I saw Him, my Lord, my valiant prince rescuing me from that dungeon of defeat, sweeping me onto his white horse of victory because He loves me.  He wouldn't leave me there in Defeat's Dungeon because He loves me.
I have to remember that I ride with the conqueror so that we can be conquerors together.
Praying that the rest of the day will see...
Happy Trails.
Posted by Amy L. Magaw at 9:45 AM 1 comment:

3314 members
This is the official group for authors to give Goodreads feedback about the site, including the <...


View this group on Goodreads »